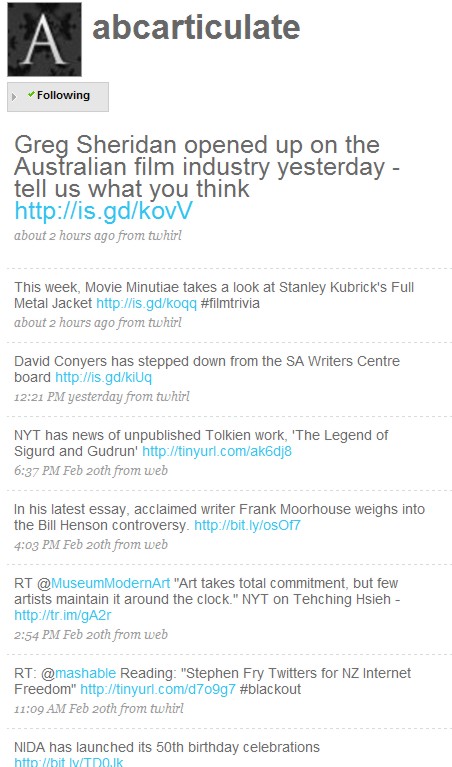 People have been asking questions about Twitter lately – wondering what the point of it was, and whether it was unnecessary when you could just use your Facebook status.

In this case the news update aspect of Twitter is something to consider. I’m following Articulate on Twitter so that I can quickly view  the ABC’s daily take on arts news and events in Australia and throughout the world. It’s quicker and cleaner than going through Google Reader. Interested? Just click on the link.

What did I discover today?

There will be much celebrating around the Party Tree in Hobbiton: Houghton Mifflin Harcourt said in an e-mail message that it planned to release a previously unpublished book by J. R. R. Tolkien that predates his novel “The Hobbit” and his fantasy epic “The Lord of the Rings.” The book, “The Legend of Sigurd and Gudrun,” was written during the 1920s and ’30s, while Tolkien held the Rawlinson and Bosworth professorship of Anglo-Saxon at Oxford University. It is his English-language narrative of the Norse hero Sigurd the Volsung, whose medieval adventures were — of course — populated by magic horses, dwarfs, dragons and gods with mischievous motives. Houghton Mifflin Harcourt said that it would publish the book, with commentary from Tolkien’s son Christopher Tolkien, on May 5.

and read the opening paragraph to an article which explained the tweet:

British actor Stephen Fry has given a global highlight to a protest against a contentious New Zealand internet law due to come into effect next week.

Cinema adaptation of Life of Pi may have found a director in Ang Lee. Good choice? http://twurl.nl/2lc8nu

Having skimmed The Life of Pi, I’m curious as to how it would translate into a film.

This one caught my eye, since I’ve posted about the YouTube Symphony Orchestra earlier

Youtube wants you to vote for its symphony orchestra; 3 Aussies are in contention. http://twurl.nl/oteltl

Reading these and other tweets didn’t take long at all. Quite satisfactory.