So, if you read my previous post, you know that I was stupid enough to delete my Twitter account in a fatal moment of confusion. You also know how devastating it was for me to realise I’d lost the community I’d grown to depend on every day.

Let me tell you how something devastating turned into something heart-warming.

The response to my status was immediate. One of the first people to respond was Jo McLeay aka @jomcleay who reassured me with the simple but powerful message, ‘We’re still here for you’.

After finally admitting my account wasn’t going to be reinstated, I decided to start a new account from scratch. It was no fun thinking about  how long it would take to rebuild. I wrote a blog post about the experience, but couldn’t tweet it out as I usually would. I could, however, throw it up on Facebook and ask my FB people to tweet it out. Would that work? 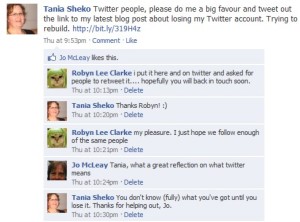 The response was swift and very touching. 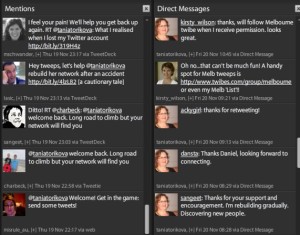 Soon my message and blog post were being retweeted all over the place. I started following people again, and in less than 24 hours I had a community of people again, over 200 of them, and only a couple of days later, over 300.

My personal learning network had rebuilt one of the most important platforms I had for communication and professional interaction.

I was back in business!

Thankyou, everyone, for all your help and support.