Creating a community of readers 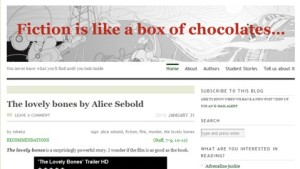 We all read, don’t we? If not books, then newspapers, if not hardcopy then online, if not novels, then graphic novels – does it really matter?

Having started my reading blog for school, I soon realised that it had to move from being limited to my own reading to including that of all the members of my school community. Of course, this is still an unrealised dream, but I was happy that so many teachers (and some students) offered their diverse reading reviews.

This year I’d like to expand the scope a little more to include anything and everything related to books, reading, film and whatever catches my eye and leads to a love of literature and ideas, as well as interaction and possibly a good laugh or at least a chuckle.

The variety of topics will hopefully mean that something will appeal at least some of the time. Ideally, interaction and collaboration with others is the goal.

Here are some examples of my recent posts:

The Age Resource Centre not only contains great resources you’d expect, but also a Reading and Writing page which includes extracts from great books (as described in this post):

Currently, Andy Griffiths has contributed a hilarious short story, Just commenting,  as part of a special series on the Summer Kids pages of The Sunday Age.

Here’s the first half of Andy’s story (you’ll love it):

WHEN I grow up I’m going to be a commentator. I’m getting really good at it, too, because I practise every chance I get. In fact, I’m practising right now.

I’m sitting at the dinner table using the pepper grinder as a microphone.

“It looks like we’re in for an exciting night’s eating,” I say in a hushed voice. “Anything can – and probably will – happen. The father is chewing on a chicken bone. The mother is pouring gravy over her potatoes. And the sister . . . well, the sister is looking directly at the commentator.”

“Can you pass the salt please, Andy?” says Jen.

“And the sister has opened play by making a direct request to the commentator to pass the salt,” I say. “The question is, will he give her the salt or is he too busy commentating?”

“Oh dear,” I exclaim. “The sister seems to have forgotten about the salt and has decided to tell on her little brother for commentating instead.”

“She’s getting impatient now,” I say. “She’s thrown away all pretence of politeness and good manners. Looks like she still really wants that salt. But her little brother is just shaking his head. Looks like we have a stand-off on our hands.”

Jen rolls her eyes. “Can you pass me the salt, please, Dad?”

“A brilliant change of tactics on the sister’s part,” I say. “Let’s see how it works out for her.”

Dad nods, picks up the salt and leans in front of me to pass it to Jen.

“What a pass!” I say into the pepper grinder.

“Straight from his hand to hers, no fumbling – and Jen is wasting no time in transferring the contents of the salt shaker to her dinner. Just look at her shaking that thing – she’s giving that shaker everything she’s got. Ladies and gentlemen, this is the salt-shakingest salt-shaker action we’ve seen around this dinner table in a long time.”

“Looks like the mother has stepped in to shut down the sister’s salt offensive.”

“Jen!” says Mum. “Please don’t talk like that at the dinner table.”

“I know your brother can be very annoying, but there’s no excuse for language like that.”

“Looks like Jen’s dinner has definitely taken a turn for the worse. Not only has she been cautioned for excessive salt use but now she’s getting into trouble for being rude at the dinner table.”

“All right, that will do now, Andy,” says Dad. “Just eat your dinner.”

“But who will do the commentating?”

“NOBODY will do the commentating!” says Mum. “We’ll all just eat our dinner in peace and quiet.”

“How can I be a professional commentator when I grow up if you don’t let me practise?”

“Just eat your dinner,” says Dad, “or else you’ll have to leave the table.”

When I found Nancie Atwell’s quote about reading and how it makes you smart, I knew I had to put that in.

There’s nothing better for you – not broccoli, not an apple a day, not aerobic exercise. In terms of the whole rest of your life, in terms of making you smart in all ways, there’s nothing better. Top-ranking scientists and mathematicians are people who read. Top-ranking historians and researchers are people who read. Reading is like money in the bank in terms of the rest of your life, but it also helps you escape from the rest of your life and live experiences you can only dream of. Most important, along with writing, reading is the best way I know to find out who you are, what you care about, and what kind of person you want to become.

When I found the homonymic (is that a word?) poem, Sum thyme’s I’m ache Thai pose (Sometimes I make typos), I thought I had to put that into a post. I love quirky stuff, and I think many students do too. Anything that has value but isn’t what they expect to be ‘academic’, classroomy (another made-up word).

Then I found out about an exhibition which included the biggest book in the world, and thought this would be perfect for the blog too. 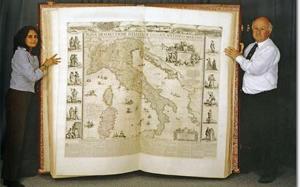 I’m hoping that the diversity and quirkiness of the post content will work well with the reviews and trailers, so that members of the school community and readers outside the school will turn to the blog for enjoyment. It would give me deep satisfaction.

Your contribution is very welcome, wherever you are.

3 responses to “Creating a community of readers”