2 Year 9 classes, a teacher, a teacher librarian, a couple of Australian YA authors and lots of blogs

This is a progress report for our blogging Year 9s (2 classes). Let me first say that I am loving, loving the learning that’s happening with this cohort. Following Michael Gerard Bauer‘s guest post, ‘I blog therefore I am‘, Nick and I were wondering how to respond and which direction to take. We loved the fact that Michael had tuned into what the boys were writing about. Michael has been generous to my students before – several years ago at my previous school. He has a brilliant way of speaking directly to the students in an informal way, combining humour with a serious message. Nick and I wanted the students to respond to his post, and to develop a theme in a post of their own. We decided to pull out Michael’s final message to the students:

So I encourage you to keep up the writing boys. Words are powerful, amazing and life changing things. Don’t pass up this opportunity to find your own and share them.

I like the idea of teachers modeling what they want their students to do, and happy that Nick agreed to both of us writing our own posts about the power of words. In doing this we lift the barrier between teacher and student, and we also let the students see a little of ourselves. I was also toying with the idea of introducing hyperlinked writing to the boys. I’ve written about the importance of hyperlinked writing before, and since then I’ve read an excellent post by Silvia Tolisano about it. Jenny Luca has referred to Silvia’s post in her own recently.  I believe it’s something we should take seriously – it’s the way we read online so all the more reason to incorporate hyperlinked writing in our set of literacies. Modeling is a good way to make a start. And so Nick and I both wrote posts using hyperlinked writing.

Nick’s post was entitled ‘Find the right words’, linking back to the earlier theme of ‘you are what you know’ and highlighting the idea of learning not just for school but ‘for the person you want to be’.

At school, we are constantly engaged in the getting and using of knowledge, and the main thing that makes this possible (even more so than an iPad!) is language.

Nick talked about poetry and revealed that he looked to

‘poets to reveal to me the ideas about life I sense in my gut, but don’t always have the words for myself.’

In his final paragraph Nick asked the students to

respond to Michael Gerard Bauer’s clarion call to embrace the power of language. Reflect on what this means to you. Perhaps think of a time when choosing just the right words was important.

The students were asked to read my response to the theme of the power of words, and to comment on three other posts, and see what kinds of ideas their classmates came up with.

More than anything else, I love the way we are all entwined in ideas which have been shared and developed – 2 year 9 classes, a teacher, a teacher librarian, a couple of Australian authors and the 2 classes of student blogs housed in the teacher’s blog. It really does become a form of diary, but not that of a solitary person, on the contrary, a shared document which traces the collaboration of ideas and dialogue as they develop over time.

It’s words, and it’s also so much more than words.

Please read some of our students’ posts (their blogs are linked on the right hand side of the main blog. We would love to hear your comments and ideas.

WORDS from Everynone on Vimeo. 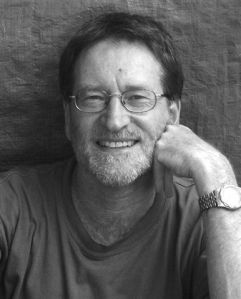 This is cross-posted on my English class blog and fiction blog.

A little while ago I wrote on my English class blog about my hopeful expectation that Michael Gerard Bauer would accept my invitation to join our creative writing project after we listened to Lemony Snicket’s The composer is dead.

It’s a brilliant, witty and hysterical story narrated by Lemony Snicket himself. The entire production is fun – the story with its personified musical instruments presented as murder suspects (boisterous trumpets proclaiming loudly and with a certain arrogant rudeness), its alliteration (’we conquered the concert’; ‘battered the band’), and its playful use of language (the percussion instruments ‘percussed’, and ‘employed xylophoniness and cymbalism’).

Similar to Peter and the wolf, the story skilfully weaves plot around descriptive information about the orchestra. The boys seemed transfixed by the story, although the musical interludes may have been a bit much for some.

As a creative writing exercise, the boys will be writing their own story –

based on a group of inanimate objects who are suspects in a murder mystery.

Well, to our absolute delight, Michael generously agreed, and very quickly wrote a brilliant and witty piece which I’m going to share with you now.

It started out as just another routine investigation, but all that changed when I opened the fridge door.

The body was there lying before me. It was wrapped in plastic, naked, plucked and headless. It was obviously the work of a madman. I examined it more closely: female chicken, size 20, possibly from Ingham, and judging by the aroma – marinated.

You have to deal with some sick people in this job.

I immediately set out on the trail of the killer. I threw open the chiller door.

‘Freeze!’ I shouted. Luckily everyone already had.

I approached my first suspect. He claimed he was a famous rap singer called Ice Tray. I didn’t like his attitude at all. He was cold and hard and refused to answer my questions. He seemed very set in his ways.

I decider to move on. I found my next suspect lurking at the back of the freezer.

‘You, what’s your name?’
‘Ice-cream.’
‘Really? Why? Did you see something?’
‘What are you talking about you idiot?’
‘I want to know what made you scream. Did you witness the murder? It was Ice Tray wasn’t it?’
‘No you fool. That’s my name, Ice-cream. Strawberry Ice-cream. But what’s this you say about a murder?’
‘That’s right sister. There’s one dead chicken downstairs. You see or hear anything suspicious? Notice any strangers hanging about?’
‘Yes as a matter of a fact I did. Yesterday a whole family of eggs moved in down there.’
‘Right. Was that was before or after the chicken bit the dust.’
‘How would I know if I’m not the murderer?’
‘Good point. I’ll work it out myself. Hmmmmm let’s see, what came first, the Chicken or the Eggs? This could be a tough case.’

I left the Freezer but not before I arranged for Ice Tray to come to the Station the next day for a more thorough interrogation.

My investigation continued. I questioned all the Eggs but they refused to crack. (Just between you and me I think some of their brains were scrambled – or possibly fried.) Then I grilled the Cheese but got nowhere. Next came the Honey. She was a real sweetie but she couldn’t tell me anything either. I was getting nowhere so I decided to offer the Bread a hundred dollars to help me find the murderer. He refused. Said he already had plenty of dough.

My chief suspect was still Ice Tray but there was another guy who made me suspicious – wouldn’t tell me his real name. First he said he was called Vegemite, then he reckoned his name was iSnack2.0 then it was Cheesybite. I decided I’d run those aliases through the computer when I got back to the Station.

Only when I was about to call it a day did I noticed the trail of what looked suspiciously like blood spots. They led me right to a tall red haired chap who went by the name of B. B. Q. Sauce. Of course he claimed he was innocent like the rest of them. Said it was just a nose bleed or something. But then B.B. told me something that got me interested. He said he’d seen Chicken getting friendly with some unsavoury characters recently, said he often saw Chicken mixing with Avocado or Chicken with Mayonnaise or Chicken with Salad and once he’d even seen Chicken with Sweet and Sour sauce!

The case was getting more and more complex and rumour had it that Gladwrap was involved in some sort of big cover up. Then, just when it looked like I’d never get to the bottom of the Chicken case, there was a major break through.

I was interrogating Ice Tray the next day under the hot lights at the Station when to my amazement, he went totally to water. I figured that was as good as a confession so I locked him away in the freezer and threw away the key.

I never did work out how Ice Tray actually committed the murder. I mean it must have been quite difficult with him not having any arms or legs or eyes or ears or brain or any visible means of support or movement, but you could just tell by looking at him that he was obviously a cold-blooded killer and a hardened criminal.

Ice Tray – his heart might have been made of ice, but I saw right through him from the start.

Our boys have been collectively brainstorming possible characteristics for their group of inanimate suspects, but as you can imagine, first time round, it’s challenging.

Thankyou so much to Michael for taking the time and donating his creativity so that our students can learn from an expert, so that they feel special, and appreciative of the privilege they’ve received.

As I’ve said many times before,

technology makes possible the connections between people which would otherwise not have occurred.

This is a great example.