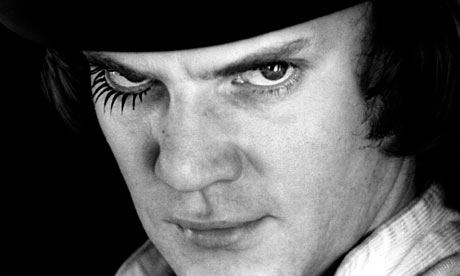 Malcolm McDowell in A clockwork orange directed by Stanely Kubrick. Photo from The Guardian.

The Guardian has created the definitive list of must-reads: 1000 novels everyone must read.

Selected by the Guardian’s Review team and a panel of expert judges, this list includes only novels – no memoirs, no short stories, no long poems – from any decade and in any language. Originally published in thematic supplements – love, crime, comedy, family and self, state of the nation, science fiction and fantasy, war and travel – they appear here for the first time in a single list.

What I like most about this massive fiction recommendation are the genre synopses which make me want to start reading right here and now and not stop until I’m finished. To give you an example, here’s what you’ll read about science fiction and fantasy:

It is sometimes assumed that science fiction, fantasy and horror must mean spaceships, elves and vampires – and indeed, you’ll find Iain M Banks, Tolkien and Bram Stoker on our list of mind-expanding reads. Yet these three genres have a tradition as venerable as the novel itself. Fiction works through metamorphosis: in every era authors explore the concerns of their times by mapping them on to invented worlds, whether they be political dystopias, fabulous kingdoms or supernatural dimensions. JG Ballard, the writer who brought SF into the mainstream, has remarked that “Everything is becoming science fiction. From the margins of an almost invisible literature has sprung the intact reality of the 20th century.” Ballard’s visions of “inner space”, Orwell, Huxley and Atwood’s totalitarian nightmares, Kafka’s uneasy bureaucracies, Gibson’s cutting-edge cool – all are examples of a literature at the forefront of the collective imagination. Every truly original writer must, by definition, create a new world. Here is a whole galaxy of worlds to explore.

What follows is a truly impressive list of synopses under genre headings. Here’s an example:

One of the first attempts to write a comprehensive “future history”, the trilogy – which also includes Foundation and Empire (1952) and Second Foundation (1953) – is Asimov’s version of Gibbon’s Decline and Fall of the Roman Empire, set on a galactic scale. Hari Seldon invents the science of psychohistory with which to combat the fall into barbarianism of the Human Empire, and sets up the Foundation to foster art, science and technology. Wish-fulfilment of the highest order, the novels are a landmark in the history of science fiction.

You’ll also find Susanna Clarke’s article on Imagined worlds, including these authors – Lewis, Tolkien, Pullman, Pratchet and Le Guin. Her introduction is enough to draw me in:

The children’s author Anthony Horowitz recently pointed out that all books are doors – when we open them we expect to be somewhere else. All books are doors; and some of them are wardrobes.

Top 10 novels that predicted the future is an interesting read. Don’t hesitate, go to this website and run off and read!